Long time no swatch. I was browsing around a Walgreens a few weeks ago and stumbled upon the new makeup randomly. Okay, it wasn’t random. I went looking for some new drugstore makeup. I picked a few things up and thought I was done, and then I saw the display with these new Milani eyeshadow palettes. Many are already familiar with Milani’s single shadows, but palettes? Game changing.

I think there were 4 palette choices in all, and I ended up snagging the bare necessities one because it was very neutral. The other one I wanted was already gone, and I’m guessing it’s because there’s a pretty orange shade in the palette.

This palette was $9.99 in Walgreens. There are 6 shades in this, so that amounts to about $1.65 per shade. That’s still very cheap, but I have said this before, drugstore makeup is getting more and more expensive it seems. I will say that I love the packaging right off the bat. I am forever a huge fan of Milani’s gold packaging.

Other than the packaging, the fact that there is a light matte shade and a dark matte shade is promising to me. The reason why is because that means this palette can be used alone to create daytime and nighttime eye looks that have dimension using a matte transition shade and darker outer corner shade. It’s more of a personal preference, but I think palettes that have both mattes and shimmers are the best and most versatile in general.

Another cool thing is that on the back there are 3 pictures of potential looks you can create using this palette. There are a few high end brands that do this as well, including Too Faced and Kat Von D, and I’ve read that people find this helpful, especially if they’re just starting out with makeup. The little brush that comes in this palette is useless and it’s not even worthy of being in the photo. That’s pretty typical of drugstore eyeshadow palettes though. It’s like a tradition. 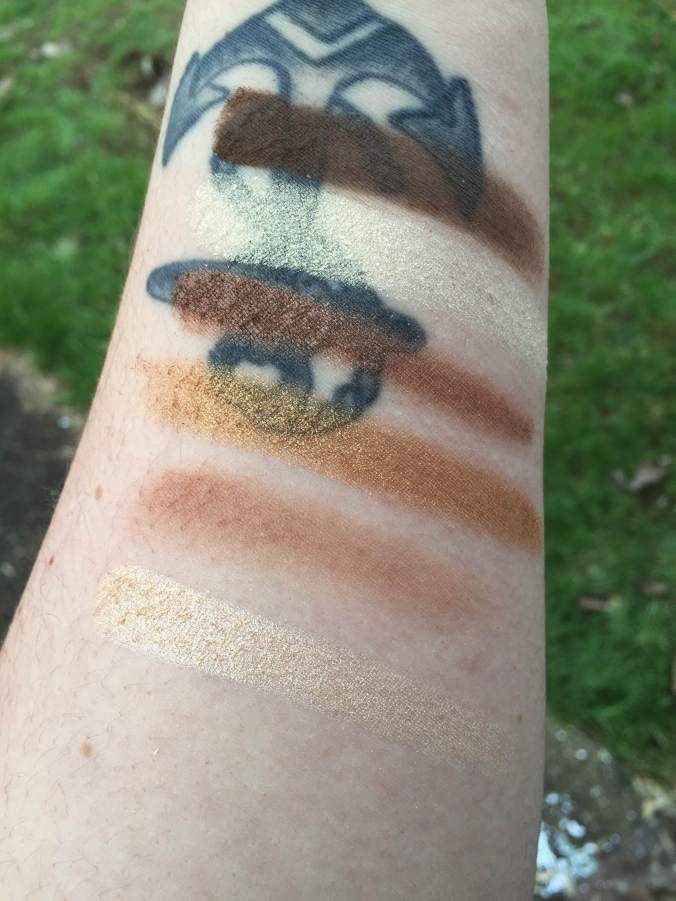 These are the swatches taken in natural daylight.

The only shade that gave me some trouble was the second matte shade, it took me a few times to get that one to show up. The rest of the shades swatches beautifully. The shimmer shades felt awesome, and I was really impressed with the formula. The gold shade crumbled a bit, but that’s also a bit typical for shimmer shades with very buttery formulas. The darker matte shade swatched awesomely as well! Look at that pigmentation!

Okay, but how did it perform on your eyeballs? Not the best quality eyeshadows I have ever worked with, but I was able to create a pretty day time look. The shimmer shades are awesome though! I found them way more pigmented and easier to apply even above the bella eye shimmer singles.

The mattes aren’t my favorite though. The dark brown was okay, but blending it can be tricky. It’s pigmented, but if you blend even a bit too much you risk making the look appear muddy or blending the shade away almost completely.

I will say this palette would be awesome for anyone just starting into makeup. It’s got two mattes and several shimmers to choose from. So, it’s not going to be overwhelming or over complicated for the casual makeup enthusiast.

Will I be picking up any more? I’m not sure. I might wait until I see some more reviews and swatches of a few of the other ones to see, but for right now, I feel underwhelmed. Because only the shimmer shades performed really well for me, I’m not sure if I will be picking this palette up too often. We’ll see. I have some of the new Morphe single shadows on the way, so I might pair this with those.

If you have this palette, what are your thoughts on it? Will you be picking this up if you don’t have it yet? Let me know in the comments!

I hope you all found this to be helpful in some way. As always, thanks for reading, and I hope you’re all having great days!

Stalk and talk to me: